EFK stack (Elastic - Fluentd/Fluentbit - Kibana) will be deployed as centralized logging solution for the Kubernetes cluster. In this stack :

The architecture is shown in the following picture 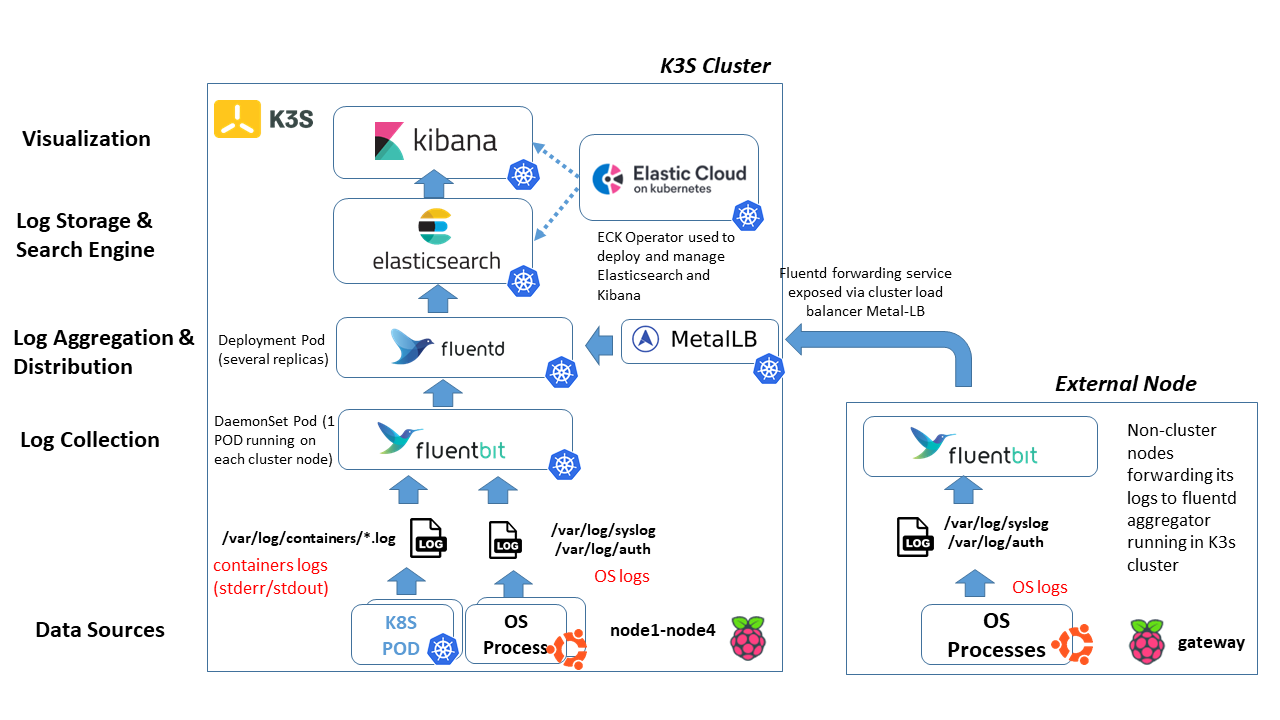 This solution will not only process logs from kubernetes cluster but also collects the logs from external nodes (i.e.: gateway node.)

In June 2020, Elastic announced that starting from 7.8 release they will provide multi-architecture docker images supporting AMD64 and ARM64 architectures.

Fluentd and Fluentbit both support ARM64 docker images for being deployed on Kubernetes clusters with the built-in configuration needed to automatically collect and parsing containers logs.

Fluentbit and fluentd official helm charts deploy the fluentbit/fluentd pods as privileged daemonset with access to hots’ /var/logs directory. In addition to container logs, same Fluentd/Fluentbit agents deployed as daemonset can collect and parse logs from systemd-based services and OS filesystem level logs (syslog, kern.log, etc., all of them located in /var/logs)

In K3S all kuberentes componentes (API server, scheduler, controller, kubelet, kube-proxy, etc.) are running within a single process (k3s). This process when running with systemd writes all its logs to /var/log/syslog file. This file need to be parsed in order to collect logs from Kubernetes (K3S) processes.

K3S logs can be also viewed with journactl command

Some of Ubuntu system logs stored are /var/logs (auth.log, systlog, kern.log) have a syslog format but with some differences from the standard:

The syslog format is the following:

Fluentbit/fluentd custom parser need to be configured to parse this kind of logs.

Two different architectures can be implemented with Fluentbit and Fluentd

This pattern includes having a logging agent, based on fluentbit or fluentd, deployed on edge (forwarder), generally where data is created, such as Kubernetes nodes, virtual machines or baremetal servers. These forwarder agents collect, parse and filter logs from the edge nodes and send data direclty to a backend service.

Similar to the forwarder-only deployment, lightweight logging agent instance is deployed on edge (forwarder) close to data sources (kubernetes nodes, virtual machines or baremetal servers). In this case, these forwarders do minimal processing and then use the forward protocol to send data to a much heavier instance of Fluentd or Fluent Bit (aggregator). This heavier instance may perform more filtering and processing before routing to the appropriate backend(s).

With this architecture, in the aggregation layer, logs can be filtered and routed not only to Elastisearch database (default route) but to a different backend to further processing. For example Kafka can be deployed as backend to build a Data Streaming Analytics architecture (Kafka, Apache Spark, Flink, etc) and route only the logs from a specfic application.

Forwarder/Aggregator architecture will be deployed in the cluster.

For additional details about all common architecture patterns that can be implemented with Fluentbit and Fluentd see “Common Architecture Patterns with Fluentd and Fluent Bit”.

The procedure for deploying EFK stack is described in the following pages: